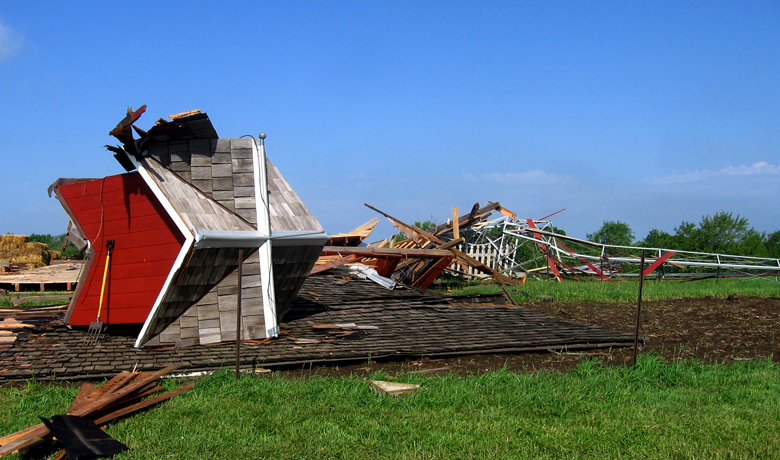 Kill Creek Farm in De Soto, Kansas is a parcel of 30 acres at the Northwest corner of K-10 Highway and Kill Creek Road, in Johnson County, Kansas. The farm has been owned by the Zimmerman family since 1949. The farmstead is relatively complete with the outbuildings that fulfilled the needs of a diversified farm of an earlier period. Some of the structures at the farm date back from the 1870’s.

Kill Creek Farm has been shared with the public since the first Harvest Festival in 1994. The annual Harvest Festival featured pumpkins grown in the Kansas River floodplains. The 1997 season brought over 2000 school children to the farmstead to learn about bees, rabbits, chickens, goats, and cattle and to personally hand milk a Jersey cow. The mission statement for the farm, from the first, was to maintain the rural heritage of Johnson County.

After seven years of working out of a rented tent, Darrel Zimmerman and his wife Ruth, began searching for an appropriate permanent structure in which to hold the Harvest Festival. In 1999, the perfect barn was located on the Earnest Waitzmann farm. The 39’x58′ building was a timber frame structure originally constructed in the 1880’s by the White family. 150 oak pegs held the mortise and tennon joinery together. The barn was brought to Kill Creek Farm in pieces and with the help of local volunteers was reconstructed in 4 and ½ months. The barn, as erected became a focal point for the farm, and a landmark for the people of De Soto, Kansas and northwestern Johnson County. In 2002, the White/Waitzmann barn was the recipient of a Kansas Preservation Bronze Medal for the efforts of the group of locals who loved old barns.

It soon became apparent that the red and white barn was to become more than a place to store straw and sell pumpkins. One of the first public events was a dedication dinner for those in the community that had so willingly given their labor to restore the barn. An associated activity was a juried art show featuring barns. A stated goal was made to make that the barn would be a place of shelter, a place of learning and a place of joyful gatherings. 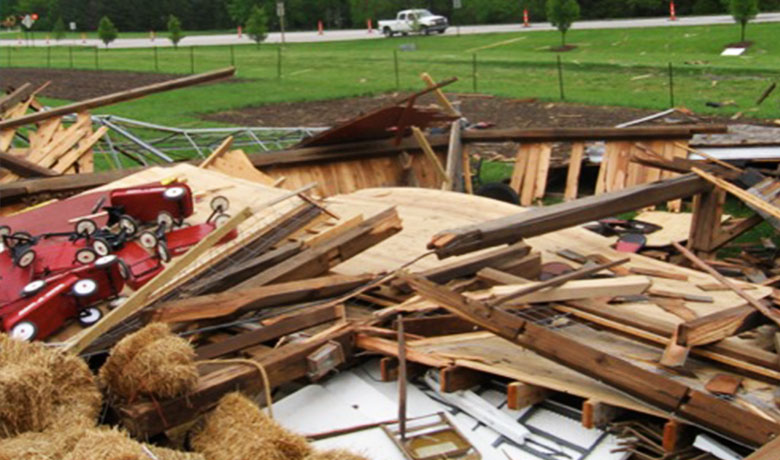 All of this community activity came to sudden halt in the night of May 12, 2010. This story was told in The De Soto Explorer, in an article by Estuardo Garcia, first published May 13, 2010. Around 11:20 p.m. Wednesday, high winds traveling in a northeasterly direction hit the area around Kansas Highway 10 and Kill Creek Road. Dee Mandich, Zimmerman’s daughter, was at the home next to the barn when the winds hit. “The whole house was shaking,” she said. “It sounded like the end of the world.” She and her husband ran into the basement to take shelter.

After the storm had passed, they inspected the damage. Mandich looked out the window to see trees down, but no real damage to the house. But something was off. She grabbed a flashlight and went outside. “There was something different out there,” she said. “When I looked out… there was no barn.”

The true extent of the damage wasn’t known until the sun came out Thursday morning. That’s when Darrel and his family fully grasped how much they had lost. As Darrel inspected the land surrounding the barn Thursday morning, he saw trees along a valley southwest of the barn completely uprooted and a clear path of destruction heading northeast of the barn. He is almost certain it was a tornado that had come through the area, although he didn’t hear any sirens last night. “I just heard this screaming wind,” he said. “I turned on the TV to check the weather, but I didn’t see anything.” Mandich began calling people who had reserved the barn for a special occasion to inform them what had happened. The barn had been rented each weekend for the next nine weeks for weddings, reunions or graduation parties.

The whole house was shaking, it sounded like the end of the world.

There was something different out there. When I looked out… there was no barn.

I just heard this screaming wind. I turned on the TV to check the weather, but I didn’t see anything.